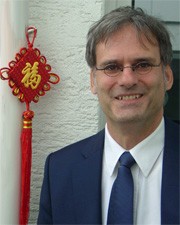 China: Hearing that, people immediately come up with a lot of different pictures. Some of them with undefined romantic ideas, others with visions of huge markets and tremendous business opportunities.

Both images I had in mind when in 2012 Chemetall gave me the opportunity to work in China as an Automotive OEM Manager Asia-Pacific. And one of the first things I found out was - like most things in life - the reality was somewhere in the middle. For roughly a year now I have been living in Changchun, the Chinese Northeast region. One of the smaller cities over here with only a few million inhabitants, living alongside the urban sprawl.

As our company is one of the world's market leader in surface treatment technology, one major part of my job is to take care of the international automotive manufacturers. All of them are expanding rapidly in “Developing Asia” as they realise the importance of this region of the world for their own future business development.

My function as a link between the international Chemetall subsidiaries gives my job a broader outlook than before, leading to an extraordinary enrichment of my business life. Working in China and East Asia is most of the time exciting, of course sometimes disappointing, but always challenging. The common aspects of the job are combined with specific cultural needs. “Loosing face” is one of them. For someone from Chinese society it is one of the worst things than can ever happen, but for someone brought up in a Western culture, not such a big deal. Knowing these intercultural traps is essential for business success. Therefore Chemetall provided me with tailor-made training before my relocation.

The first months of my time in Asia are now over. I used the time to get acquainted with local working practices and living conditions. For the future I`m looking forward to being reunited with my family out here in China. From the business point of view there are lots of challenging projects in the offing; opportunities to create value and growth for our company.

I`m proud being a member of Chemetall`s international community in this really thrilling part of today`s world!

I joined Chemetall in Germany in 1988 as engineer and I have been in China since September 2012.